Welcome, fiction writers! In this post, we’ll be looking at how to choose the right point of view for your story.

Point of View: An Introduction

Simply stated, point of view is the vantage point from which a story is told. But point of view is much more complicated than that. It encompasses everything from who the narrator is (the author? a character?) to what attitude they have about the story they’re telling.

When the point of view for a short story or novel has been thoughtfully constructed, it acts nearly invisibly. But lose your footing, even briefly, and the reader will immediately sense something is off. Even subtle inconsistencies in a story’s point of view can pull us out of the moment.

With the stakes so high, it’s important to make deliberate, thoughtful choices about point of view. Yet all too often, this show-stopping element of fiction writing takes a backseat to writers’ concerns about plot and character. But point of view isn’t an easy gimmick or a frivolous choice to be taken lightly. Point of view, when used correctly, is the story.

Let me repeat that. Point of view IS the story.

But those aren’t just “different spins” on the same story. They are all completely different stories.

The infinite subtleties and endless possibilities of point of view are too much for a single blog post. But I’d like to share some point of view basics with you as a jumping off point.

Here’s a list of the five most common points of view, and how to decide which is right for you. If you’d like some help remembering them all, you can get a printable Point of View Cheatsheet in my store. 🙂

The Five Basic Points of View

The five basic points of view are first person, second person, third person limited, third person omniscient, and multiple point view. Choosing between them can seem overwhelming at first, but you can simplify your decision by thinking of them as existing on a continuum between perspective and intimacy. 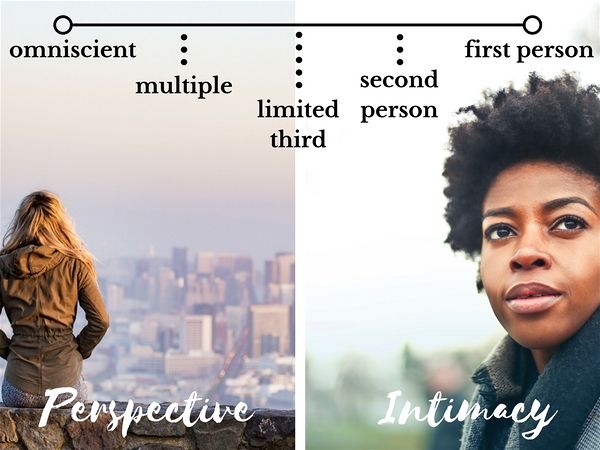 As you can see in the graphic, third person omniscient allows you the most perspective with the least amount of intimacy. On the other end, first person gives you a lot of intimacy with very little perspective. So one of the first questions to ask yourself when deciding what point of view is right for your novel or short story is: Which is more important, perspective or intimacy?

For an epic fantasy that spans several hundred years and many continents, perspective is probably more important than intimacy. For a young adult novel about the inner complexity of a depressed teen, you’ll likely favor intimacy over perspective. If you need a good mix of both, third person limited can be a good way to go (which is why so many books are written with this point of view!).

In first person point of view, the storyteller uses the pronoun “I” or “we.” This narrator is generally a character from the book, although in rare circumstances it may be the author.

A first person point of view is perfect if you have a character with a unique voice to narrate your story. Ideally, this character should be the protagonist of the story. However that’s not a strict rule. The Great Gatsby was told in the first person by a “peripheral narrator.”

First person has the most intimacy and the least perspective of all the viewpoints. That’s because you’re completely trapped inside the perspective of a single character. Not only do we see everything from that character’s point of view, we hear about it in their voice. For that reason, it’s especially important that your narrating character is someone that you (and your reader) are interested in spending a lot of time with.

Many writing advice-givers will try to steer you away from first person, claiming that it’s too difficult for a beginner. But if it seems like the right choice for your story, don’t shy away from it! First person presents unique challenges, but also unique payoffs when done well.

Second person point of view is more rarely used than first or third. With second person, you tell the story as though the reader is the viewpoint character. Like first person, it offers a ton of intimacy and not a lot of perspective. When used carefully, second person can bring an immediacy and intensity to the work that makes the reader feel very involved in the story.

On the other hand, sometimes second person can be too intense. For that reason, second person is more often used for short and/or experimental work. (However the novel Bright Lights Big City was written in second person!)

As always, you’re the boss! Feel free to experiment. Many publishers do shy away from accepting stories written in the second person. But that shouldn’t stop you from using it if it feels right.

Too much to remember? Keep these point of view basics in your back pocket for reference! Get a printable Point of View Cheatsheet in my store. 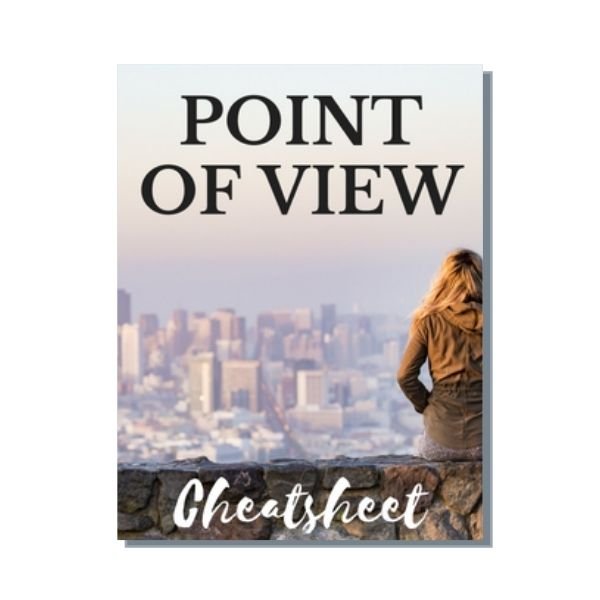 In third person, the author (not a character, like with first person) narrates the story. There are endless variations of the third-person point of view, but the most common are third person limited and third person omniscient. Let’s look at each.

In third person limited, you only give readers access to one character’s inner thoughts (usually the main character or protagonist). Harry Potter is a perfect example. Whereas first person sacrifices perspective for intimacy, and omniscient does the opposite, third person has the advantage of combining both. We have a bit more distance from the perspective of the main character than with first person, yet we still have access to their inner world.

In third person omniscient, the narrator (aka the author) knows everything. They have access to every character’s inner thoughts and feelings, and every detail about the story.

Omniscient was very popular in Victorian fiction, but has fallen out of favor recently. These days, third person limited is much more common, as modern readers tend to prefer to experience more intimacy with the characters. Because the omniscient is an all-knowing point of view, we don’t get to deeply experience any one character’s perspective, which can leave modern readers feeling unsatisfied. But again: Your story, your rules! If omniscient feels like the right choice, go for it!

In multiple point of view, we get the perspectives of multiple characters. You can use multiple first person (The Poisonwood Bible by Barbara Kingsolver); multiple third person (Song of Ice and Fire by George R.R. Martin); or mixed multiple, which uses both third and first person (Strange as This Weather Has Been by Ann Pancake).

Unlike third person omniscient, stories written with multiple point of view don’t shift viewpoint characters within a chapter or section. Instead, each part is written entirely from the perspective of a different character.

Multiple point of view can allow you to widen and complicate your story world. However, keep in the mind that the more viewpoint characters you have, the less intimacy the reader will have with each character. For more information about multiple point of view, see my blog post A Beginner’s Guide to Multiple Point of View.

Connect with me on social media