In this post, I’ll show you how to create a story-level character arc using the DCAST method. Sound good? Super. Let’s get started.

Character arcs come in different shapes. They can be positive, negative, flat, ambiguous, bittersweet, or any combination.

Why character arcs are important

Good characters are essential to a good story. Imagine To Kill a Mockingbird without Scout; The Hunger Games without Katniss; Harry Potter without Harry, Ron, or Hermione; or Everything is Illuminated without Alex. This is not to minimize the importance of good plot. But a plot without good characters will fall flat.

That’s because readers don’t care about your plot by itself. They care about how your plot affects your characters. If your plot is full of crazy, exciting events but your characters are stiff, cardboard cut-outs who watch blankly from the sidelines as the story passes them by, your story will feel lopsided and unsatisfying.

That’s where character arcs come in. But, as you’ve probably figured out already, creating a character arc isn’t the easiest thing to do. I invented the DCAST method because I was frustrated and overwhelmed with all the “character development” sheets and checklists that were a mile long… but didn’t actually help me get to the heart of my character’s arc. Now, I’m able to get clear relatively quickly using the acronym DCAST to remind me of the most important character arc elements.

In this post, I’ll introduce you to the basics of creating a story-level arc for your character using the DCAST method.

We’re going to look at giving your character an overall, story-level arc using the DCAST method. That means we’ll chart their internal development over the course of the entire story. They may have smaller arcs and changes within the story, but this top-level arc defines their overarching purpose and change (or lack thereof).

I stress this because often writers lose sight of the forest for the trees. They focus on all the smaller internal shifts their character goes through… and forget to define their character’s story-level journey. This can make for a story that lacks focus and drive. 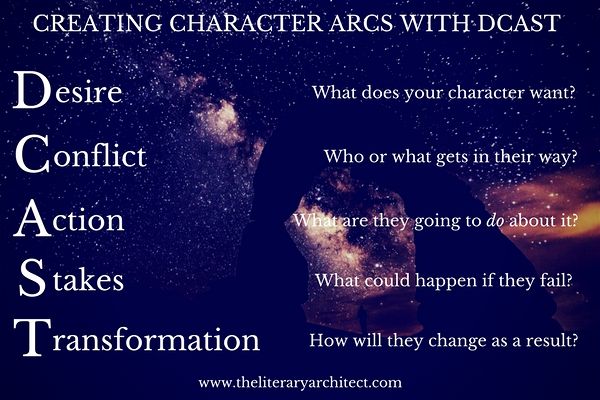 D is for Desire or Goal

As you explore this question, you’ll probably come up with a range of answers. That’s fine. Most characters want more than one thing. But narrowing it down to one or two overarching desires will give your story more focus and make it easier to create a coherent throughline for your character.

For a well-rounded character and a head-start on your plot, try to choose one internal desire and one external desire (sometimes called a “goal”) for your character.

External desires come into play heavily during the process of plotting your story, and should ideally tie into your characters internal desires.

C is for Conflict or Obstacle

Okay, so now you know what your character wants. Great! But in order for your character to have an arc, they can’t just rush straight ahead and get exactly what they want without any obstacles. That trajectory is not only boring, it’s flat. And arcs are, you know, arc-y. So.

What stands in the way of your character getting what they want? This conflict can be internal, external, or both. Again, you might have a long list at first. But try to narrow it down to one or two major conflicts. This will help you keep your story focused. When you get into plotting your story on the scene- and chapter-level, you can explore subplots and sub-conflicts. But for now, decide what your character’s big, story-level conflict is going to be. When I’m using this method, I like to choose one major internal and one major external conflict.

A is for Action

You know what your character wants, and what stands in the way of them achieving their desire. Now… What is your character going to do about it? What action will they take, or be forced to take? This will tell us a lot about your character. Not everyone will react the same under the same circumstances. This question is especially important for writers who are prone to creating passive characters.

If your answer is, “Nothing—my character isn’t going to do anything,” go back to the first step, Desire. Chances are, your character doesn’t have a strong enough desire. Find one that’s strong enough to motivate them into action.

If your answer is, “My character is going to do a, b, c, d, e, and f…” Stop right there, and get out a notepad. It’s great that you have so many ideas for how your character is going to react to the situation. Write them all down so that you don’t forget them. You will use these notes when you’re plotting your story on the chapter and seen level.

But for right now, come up with one major action that your character will take in the story as a whole. You might not be able to express this with several words, you might need a whole sentence. But be clear about the difference between the Big Action that defines your entire story, and the Little Actions that make up your plot.

For example, in The Hunger Games, Katniss takes many, many actions. She kills game, trades at the Hob, gets into a fight with Cato, lays flowers on Rue’s grave… Those are all little, scene-level actions. Her big, story-level action could be described as follows:

[Desire] Katniss wants to protect her family, but [conflict] her sister is chosen to go to the hunger games, so [main action of the story] Katniss goes to the games in her sister’s place and wins.

For those of you who are literary writers, I can already hear your protests: But that’s formulaic… It only works for mainstream fiction… My story is so much more subtle than that, etc. In which case I offer you the same template for Cormac McCarthy’s The Road: [Desire] An unnamed man wants to protect his son, but [conflict] the world is cold and bleak and full of cannibals, so [action] he attempts to walk south toward warmer weather and safety.

Action is all about the external. Even in a story that is not plot-driven, there are always opportunities to put your character into action.

Action is key to shaping an arc because it demands movement. The shape of desire without an obstacle is a straight, flat line. But desire with an obstacle quickly becomes a frozen dynamic, like the folk tale about the two goats who butt heads on the single-lane bridge. Something has to give in order a change – the arc – to happen… even if the action is just your character retreating from their desires to the point that they’re completely steamrolled by the conflict. But they’ve got to move one way or the other for the arc to take shape.

S is for Stakes

Okay, so you know what your character wants, what the conflict is, and what they’re going to do about it. But what will happen if your character doesn’t act? Or if they act and fail? What does your character stand to lose by failing to get what they want? Why do they continue to struggle and move forward despite the obstacles?

Maybe they will be doomed to a life of unhappiness. Their marriage might fall apart. Maybe they will go to jail, or be eaten alive by vampires, or freeze to death, or be forced into homelessness. They might never reconcile with their child or parent. They might lose their integrity. Remember, stakes don’t have to be life-or-death. The consequences of failing just need to be important enough to your character that we’re convinced of why they keep trying.

Stakes help create an arc because it’s a force that pushes forward in the face of conflict. If your character meets an obstacle and just walks away… well, you could definitely create an arc out of that, but that’s a topic for another blog post. Let’s just say it’s an easier more versatile choice to have something at stake. Stakes opens up opportunities for dramatic things to happen for your character as the tension rises and the conflict becomes more intense.

T is for Transformation or Change

Now, your character doesn’t have to change. If they are confronted with an obstacle to their desire and fail to succeed because they refuse to change, then you’ve just written a tragedy or another non-positive arc. But even if that’s the case, you should have a clear idea of the potential change they’ve refused so you can communicate that to the reader.

So… How will the events of your story force your character to change in order to get what they want? To transform? To become a different person?

And if your character refuses to change and insists on starring in their own tragedy, why and how have they resisted change? Can the reader relate to this refusal and feel empathy for the character, or are we standing in judgment of their actions?

That’s it! Now go forth and create your character’s arc!

Connect with me on social media